Six years ago this March and after 25 years working with Wall Street investment and banking firms, I started Total Digital Security. Risk management had met head-on with cyber, and suddenly everyone had a new problem. We started TDS to help people manage the change. Here's an overview of what cyber risk looked like then, where we are now, and what we see for 2019 and the years ahead.

When I started TDS in 2013. and told folks our mission was to help people prepare for problems they never had before, you could say the response was less than encouraging.

But it didn't matter.

For me, here's how it looked:

I knew I could help.

And with a confidence borne from experience that prepared me for the job, I foresaw how I could make a meaningful change for the better.

These things, coupled with a sincere desire to be part of the solution, created an opportunity more evident to myself than most.

Cyber was putting the traditional notion of risk on its head.

By 2013 it was clear, the new face of risk was existential and would require a new set of survival skills and tools. 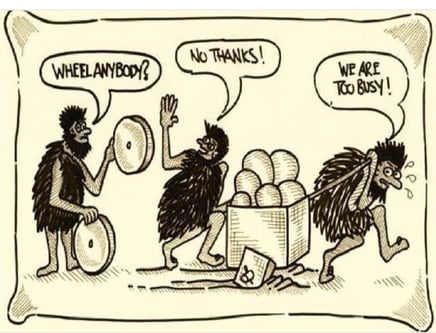 As I chronicled when starting TDS six years ago not only was no one ready, but most didn't comprehend digital risk enough to care.

By 2014, we defined our mission as "Cybersecurity for Life".  Our focus would be at the intersection of people, the technology they use every day, and the new face of risk.

We defined our business purpose as:

"Make industrial-grade cybersecurity technology accessible, affordable, and easy to use for everyone."

And our problem-solving value proposition as:

"Protection from digital risk that works across all your devices, everywhere, all the time."

Click the image below for a slideshow artifact from our start-up years. It explains who we are, what we do, and why we do it - and it comes from a perspective considered fresh in 2014. 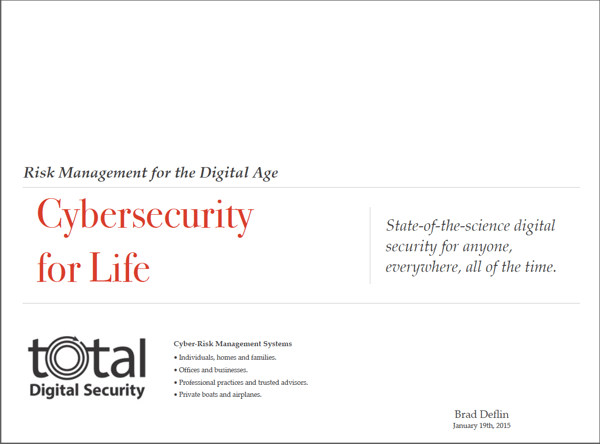 In retrospect, I'm proud of the vision we shared in 2014. Our approach is original and innovative, and our message is increasingly relevant to so many. And I'm proud of the thousands we've helped in the four years since our first presentation on "Cybersecurity for Life."

Experience, they say, is the best teacher. So for insight let's look to history's record of evolutionary-scale change. 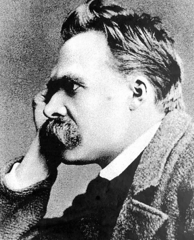 In the late 1800's, Friedrich Nietzsche foresaw World War I as the climactic event of adjustment from the agricultural era of the past, to the new Industrial Age of the future.

Like stone, bronze, and iron had respectively changed everything for humankind before, Nietzsche knew that in his day it was steel trains and industrial factories that would determine tomorrow's fittest and class-status.

In our day, it's the historical transformation and adjustment from the Industrial Age to the Digital Age and the re-writing of rules for individual and collective survival and success will be as or more unsettling than the global events of 100 years ago.

Evolution's natural selection process applies individually and collectively, and with humans cycles of change force a new order that redefines classes of "haves" and "have-nots."

The new, digitally-driven rules for survival and success will change everything in our lives. Including, invariably, a selection process that like transitional eras of the past will ultimately redefine class-status.

Back, again, to history for more insight.

For humanity's experience with age-defining change, and the selection process that invariably accompanies it, let's refer to Will and Ariel Durant. Their 11-volume historical record "Story of Civilization" is considered by many the authority on such things.

"... experiences and situations so novel that native reactions instinctive and immediate broke down in utter failure." 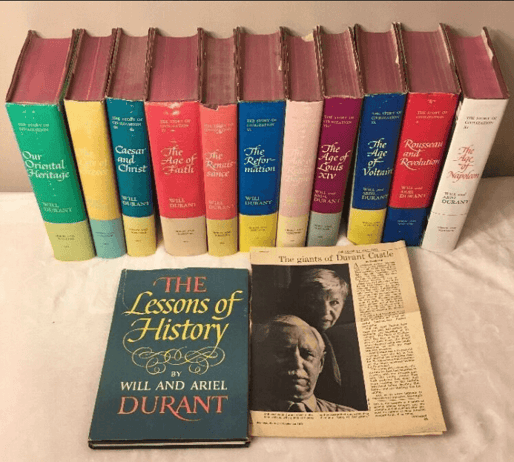 The Durants' observations of the past are what most on the planet are feeling now: Past education and experience aren't sufficiently serving the digital-related challenges humankind is facing for survival and success today.

The Greatest Transfer of Wealth in History

Consistent with the age-old process of human evolution and re-selection caused by significant change; it's the predators that move first and win the first innings of survival's new game.

The predator's barbaric activities start with the weakest. In these early, transitional years of the new Digital Age, it includes anyone that owns personal technology and uses it to access the internet without awareness, protection, and critical thinking skills suitable for the times. They don't comprehend or care that their personal information has been weaponized for use against them forever.

Currently, using the parameters above, the victim-pool stands at a cool 3.5 billion individuals. And it's headed to over 5 billion before the decade's close.

Someone very credible did the math, and their conclusion? This turn of ages will cost civilization $6 trillion and represents the "Greatest Transfer of Wealth in History."

With trillions of dollars at stake, the digital predator is unleashed to claim the spoils.

For today's predator and for the first time in history, and this is what makes it so different this time around; borders and walls don't protect, fences and moats are ineffective, and traditional weapons no longer work to defend or counter-attack.

And the kicker to the new paradigm?

With cryptocurrencies here to stay and criminal loot is now portable, liquid, and anonymous. Digital wealth eliminates the hassle of fencing and laundering, and easily evades jurisdictional tax and law enforcement authorities.

It's in these early, transitional years from the old to the new where "The Greatest Transfer of Wealth in the History of Mankind" will run its course. And not adapting to the new, digitally-defined rules of survival and success serves the cyber-wolf like a deaf lamb with a bum leg.

But, for the first time since starting almost six years ago, I sense a swell of change for the better.

When TDS started in 2013, no one cared about digital risk unless it was the Pentagon, Fortune 100, or other large organization. They were concerned with military secrets, corporate espionage, and IP theft. But privacy? Personal information? Financial loss? Existential safety and security? No one cared, and almost no one understood.

Here are a few recent headlines from the mainstream that represent what I see more broadly as evidence of the first wave of adaption (comprehending and caring) from the masses:

WE’RE ALL JUST STARTING TO REALIZE THE POWER OF PERSONAL DATA
"Our personal data is being sold, traded, and shared in ways that we’re only beginning to fully unravel. The next step in 2019 will be deciding what should be done about it."  WIRED Magazine, Dec. 28, 2018.

YOUR DATA WAS PROBABLY STOLEN IN CYBERATTACK IN 2018 – AND YOU SHOULD CARE
"Billions of people were affected by data breaches and cyberattacks in 2018 – 765 million in the months of April, May and June alone – with losses surpassing tens of billions of dollars."  USA Today, Dec. 28, 2018

WHY YOU SHOULD BE WORRIED ABOUT GETTING HACKED IN 2019
"User data has become one of the more sought-after commodities among criminals, and that means breaches of the scale and magnitude we saw in 2018 will continue in 2019."  VICE, Dec. 27, 2018 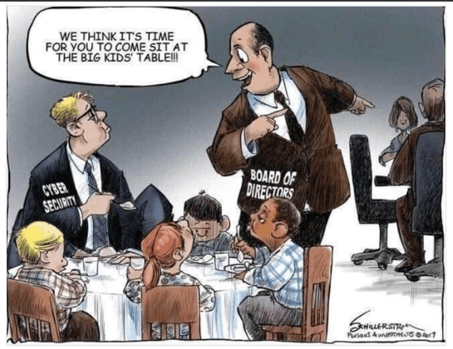 Finally, people are waking up and accepting the stakes as real. There is a ton of work to do, and it's going to take transformative leadership that compels individuals and cultures to adapt.

Over the following few years, cyber-related risks and damages are going to get much, much worse.

I'm optimistic that attitudes are beginning to change for the better, and I've always championed how the cybersecurity industry is advancing with innovation that is driving affordability, ease-of-use, and efficacy. After all, that's what TDS does - connects you and your technology to the best available cybersecurity for your needs.

But broadly, society is just too far behind for anyone to expect cyber-related risk and losses will plateau anytime soon.

Climactic events mark transitionary moments for humankind when major change causes historical shifts. In Nietzsche's time it was WWI. While the across-the-bow shot has yet to be fired for the Digital Age, some are prognosticating its inevitable boom.

2019: CYBER WAR - Part 1  "... a major cyber attack is on its way, appearing as early as 2019. It would cause unimaginable disruption and devastation.  The only limitation aside from the attacker's imagination is our preparedness."

From The Wall Street Journal:

THE CRYPTO CRIME WAVE IS HERE  "From stickups and drug deals to white-collar scams, cryptocurrency-related crime is soaring—and law enforcement is scrambling to keep up."

Here's one more insight to next year in cyber-risk from Jay Goldberg at Banyan Hill Publishing, from December 29th:

CYBERATTACKS WILL SHOCK THE NATION IN 2019

"But you can take steps now to prevent attacks on your personal devices. For more information, check out privacy expert Ted Bauman’s special report on this topic."

Remember when I said in 2013 "No one cares."? Well, I fibbed because there was one guy that did care - it was Ted Bauman.

Ted Bauman cared and comprehended the stakes at hand fully. He knew the implications of cyber to privacy, wealth protection, and democracy, and he's written and presented on it ever since.

Ted has included me in his publications and conferences many times over the years, and I'm proud to call Ted Bauman an advocate of our work and cybersecurity solutions.

And that brings us full circle, as Ted includes my article "On Filter Bubbles and the Data-Industrial Complex" in his Bauman Letter for January 2019. 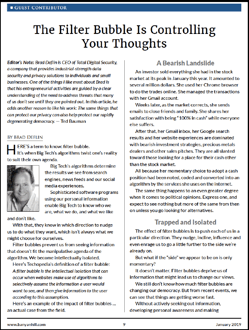 All the articles quoted above, are linked in the tiles under the signature line below.

On the Eve of a New Year, the Dawn of a New Age

On a closing note, and as long as we're doing full-circles, let's go back to the source for more wisdom from the ages.

Will Durant, when asked what the ultimate nugget of knowledge he gleaned from writing 11-volumes and 14,777 words on "The Story of Civilization," replied;

"The failure of plasticity dooms."  Will Durant

Thank you, Mr. Durant. You deserve a pause for effect here.

Individual and cultural survival today demand new critical thinking skills and tools, and resiliency and self-reliance are the hallmarks of success in the Digital Age. We're as committed and as passionate about our mission of "Cybersecurity for Life" as we were in 2013, and we're excited about our growing role as part of the solution to what Warren Buffett last year called "the greatest risk to mankind."

2019 will be a defining moment in the opening chapters of a long cycle of adjustment ahead. Call me if I can help.

Thanks for reading, and best wishes for a safe and prosperous New Year 2019. 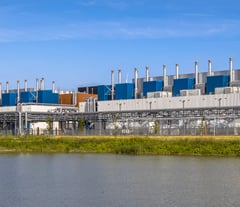 On Filter Bubbles and the Data -Industrial Complex

"Brad Deflin is CEO of Total Digital Security, a company that provides industrial-strength data security and privacy solutions to individuals and small businesses. One of the things I like most about Brad ..."  The Bauman Letter, January 2019 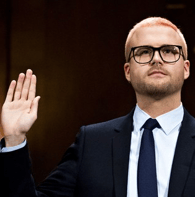 "... if anything became clear this year, it’s that consumers have a lot more to learn about what happens to their data online—how it’s gathered, who gets to look at it, and what it’s worth." Wired Magazine, Dec. 28, 2018 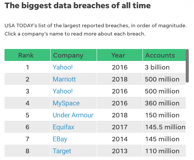 Click the image at left for a chart listing the top 25 breaches of all time - all but four have happened over the last three years.
USA Today, Dec. 28, 2018

Why You Should Be Worried About Getting Hacked in 2019

“Ever more sophisticated tools and techniques for hacking are available for downloading from the web ... and the number of unsophisticated hackers will rise,”  VICE, Dec. 29, 2018 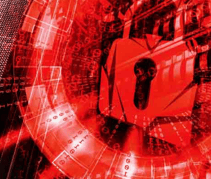 Cyberattacks Will Shock the Nation in 2019